Stephen J. “Steve” Ditko (born November 2, 1927) is an American comic book artist and writer best known as the co-creator of the Marvel Comics heroes Spider-Man & Doctor Strange. Considered a legend by many for his co-creation of some of Marvel’s most iconic characters, Ditko’s post-1960s comics work has had little impact, and by the end of the 1990s he had retired from mainstream publishing. For most of the last few decades, Ditko has maintained a secretive profile, only occasionally self-publishing his Objectivist-inspired comics.

What more can I say about Ditko that I didn’t already here? Well, he drew Batman once, that’s what. As far as I can tell, the only time my favorite Objectivist artist ever drew the Dark Knight Detective was, bizarrely, in the pages of Man-Bat #1, from 1975. An extremely short-lived series (this was the first of only two issues before it was canceled), Man-Bat featured the exploits of Kirk Langstrom, a scientist whose experiments in things led him to become the incredibly-literal titular creature.

The 70s saw Ditko largely acting as a journeyman penciller, drawing varied books for varied publishers while working on his more personal Ayn Rand-inspired work. Hence his work on Man-Bat. Even on work-for-hire like this, Ditko’s quirky style shines through. I love how almost every one of his Batman renderings hides his face in complete shadow apart from his eyes. I don’t think I’ve seen another artist do that before. 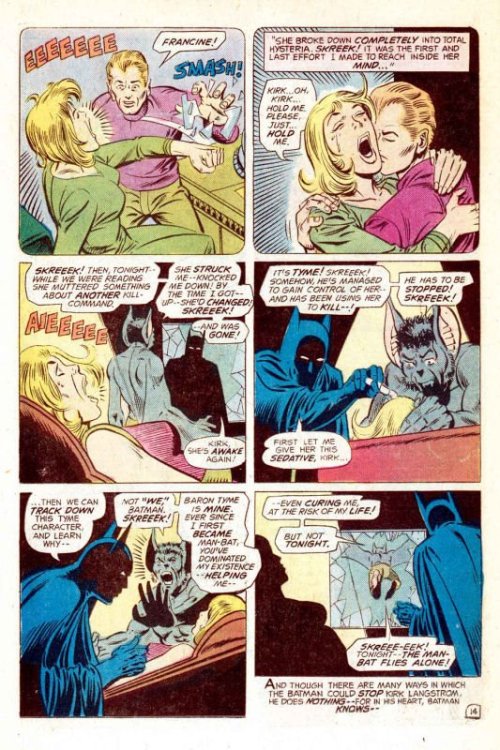 Like Jack Kirby, Ditko did a lot of work for DC after leaving Marvel, creating or co-creating characters like The Creeper, Hawk & Dove and Shade, The Changing Man along the way. Also like Kirby, he rarely worked on DC’s most famous icons. So it’s a treat to see his take on Batman, even if it’s just in the form of a few pages in an obscure spin-off 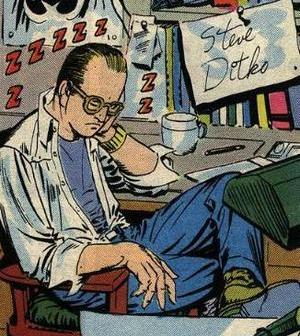 Remember Steve Ditko? Co-created Spider-Man and Doctor Strange, worked on lots of other comics? He’s 82 today, and I wrote a bit of a biographical piece on him in celebration of his birthday. Please check it out, it took a bit of time to research and write, but I think it turned out pretty well.

Please feel free to offer any comments, criticisms, etc. Thanks!

(There’s no official point where the Golden Age ended and the Silver Age began. For the purpose of this challenge, I’m using a transition approach. Basically, I’m counting any new characters/series that debut after November of 1962 when Fantastic Four #1 hit newsstands.  Existing series that reflect a Golden Age approach were phased out over the next couple of years and won’t be covered in the Silver Age Challenge.)

As you can see, a whole lot of famous characters were introduced in 1962 and late 1961.  From a conceptual standpoint, the minds at Marvel were very, very rich at this point.

The new super heroes began to take over the established anthology titles just a few months after Fantastic Four debuted.  The FF and Hulk stories were 20-25 pages while the anthology lead features were about 10-14 pages.  All of these stories were written by Stan Lee and, incredibly, penciled by Jack Kirby (some of the dialogue was written by Lee’s brother, Larry Lieber).

The only 1961/1962 Marvel super hero comic that wasn’t penciled by Jack Kirby, instead illustrated by Steve Ditko.  Amazing Fantasy was on the ropes but the one-off Spider-Man story was a success, leading to the character’s own series the following year.

Okay, let’s be frank: the writing is terrible.  A lot of the concepts are cool but the writing is just fucking wretched.  I think Stan Lee was either afraid of women, hated them, or just hadn’t met any, because their portrayals are disturbingly shallow.  Unlike her Fantastic Four teammates, Susan Storm/Invisible Girl has no apparent interests and spends most of her time daydreaming about the hunky Sub-Mariner.  The women in the Hulk and Thor strips spend most of their time being thoughtless and swooning over the title characters.

Additionally, the solutions to most scenarios are incredibly cheap and often involve powers that the heroes heretofore had never displayed.  Remember the battle at the end of Superman II in which Superman suddenly has the power to create illusion versions of himself, or shoot lasers out of his hands, or to throw the ‘S’ on his chest and have it transform into some kind of cellophane trap?  That’s the kind of crap you get here.  The Human Torch makes “mirages” of items he saw earlier in the day, even though he’s on the top floor of a skyscraper and can’t even see the item he’s somehow making a mirage of.  Thor spins his hammer so fast that it produces “anti-matter”.

There are plenty of super simplistic “Free World vs Commies” type politics that can only be described as retarded.  I know that the political atmosphere was quite different back then and comics were under completely unfair scrutiny but it feels like Rush Limbaugh was the political adviser.  The Cuban issue is touched on, presenting Castro as a straight up villain and Batista as a good guy (ugh).

The art is almost always solid but the fact is that is you can’t expect a guy (Jack Kirby) to pencil 40-60 pages a month and have it all be awesome.  It seems like some titles were either higher priorities or just had better inkers, as Fantastic Four and Thor stories seem to have better art than the Hulk stories.  Of interesting note is the constantly-evolving nature of some of the series, especially FF and Hulk.  It seems that Hulk is written and drawn differently each issue.  They just didn’t know what to do with him.

The best series is definitely FF, thanks largely to the hilarious bickerings of Human Torch and THing.  As I read the stories, I keep hoping they will murder each other.  Additionally, the delightfully haughty Sub-Mariner comes by all the time to try to kill the male members and have a shot at raping Invisible Girl.  The weakest series is ol’ Ant Man.  The old bore just shrinks himself down and then engages in run of the mill anti-commie detective work.