A lot has been happening lately, and we wanted to fill you all in. First off, the Golden Veins Singles Club (http://www.goldenveins.com/singlesclub.html) is about to begin. On September 14th, the first of 12 “digital 45s” will be released, with a new single coming out each subsequent month for a year. These digital singles contain an A-side and a B-side, as well as a remix. They will all be available for download individually as they’re released. However, joining the Singles Club offers even more material (plus it’s cheaper).

There are 4 levels of Singles Club membership, ranging from digital downloads of all 40 (at least) songs ($10), all the way up to a package which includes t-shirts, cassettes, LPs, personalized songs, and more (limited early bird price of $55). For more detailed info on the club, please visit http://www.goldenveins.com/singlesclub.html.

Even more exciting than finally releasing material is that we’re giving away the A and B-side from our first single, “Gravitational Collapse”. Our first A-side, “Gravitational Collapse” is the aural equivalent of being lost in space – simultaneously ethereal, melancholic and exuberant. And there’s a whistling solo. The B-side, “Carcinogenic Kiss,” is a robo punk-funk kiss-off, which begins with bile and ends in tears.

And while at the site, you can also hear the 4 remixes (by Adam Robert Haug, Mil, and Matt Bad) that are included with the “Gravitational Collapse” single, as well as aural teaser trailers for the first 12 songs, so you can get an idea of what’s to come.

That’s all the news for now, but there’s new work being done as I type this, so expect more emails in the near future!

Thanks for being rad dudes!

ps- artwork for “Gravitational Collapse” was created by UCIEL.

this is from a show at The Vaudeville Mews in Des Moines, IA.

it was on 10.04.08 with one for the team, adam robert haug, deep sleep waltzing, and bradley unit.

Planning a winter tour is kind of a dumb idea. Even if you’re heading to warmer climates.  Reason being, you still have to load the van in the cold weather of Des Moines, Ia.

Anyway, the first night of tour was Omaha,  a short 2 hour drive from Des Moines. With this in mind, we plan a 4:30 departure time.  We do it BP style and roll out-of-town around 6:15 instead.  Just outside of Omaha we see some chrome-platted truck balls (or truck nuts, if you prefer).  We take it as a good sign for the tour.

The show is at the Barley St. Tavern. Nice place. I would call it a 70’s throwback-type bar, except this place was open in the 70’s, so it’s the real deal.  No posturing allowed here.

Even with the hand-wringing of the sound man over the large 5 band bill, the show doesn’t being until 10pm. Spring Acres kicks it off.  He’s pretty rad. We play second.  Personally, I don’t think it is too strong a set on our part, but the other guys think otherwise. Oui Bandits play next. They are rad as well.  Following them is our good pal Adam Robert Haug. He is always rad.  Finally, It’s True wrap things up just in time to make the 1am closing time. They are especially rad.

All-in-all, I think it is a good show.  I like all the bands and the turnout is great.  Easily the strongest bill we’ve played in a long time. 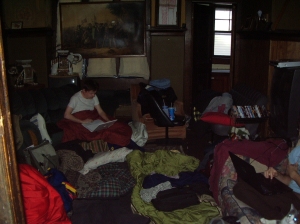 We awake around 10 in living room of the legendary Hotel Frank. Collecting our things (but not quite everything as I forget my toiletries’ bag, however I won’t notice for another 12 hours. I contemplate not showering/brushing my teeth/general grooming for the entire tour, but ultimately decide against it). We breakfast at McFosters’, much like we do everytime we play Omaha.  As always, it is delicious. And entirely vegan/vegetarian…even Tony’s meal!

Aside from me starting a game on Chrono Trigger DS, the drive to Wichita is uneventful.

We arrive in Wichita around 5:30. It’s good to see the Barnhardts again. Mo has prepared some wonderful vegan/vegetarian food.  We catch up with her and the rest of the family. After dinner, we get settled and the house begins to fill-up.  Show starts at 8. First band Toy Sails rocks out. First song in, the bassist trips, falls, and manages to bring a window.  Probably just about any other house show, that kind of thing would get the show shut down. However, this is not just any place. This is the Vertical Violet.  Breck, man of the house shrugs, cleans up the glass, and the show continues.  We play and the crowd generally seems to dig us.  The third and final band, polarOPPOSITEbear, has just come off of a three-week tour to the East Coast and back and it shows. They play a tight set.

After the show, Tony and Scott play boggle with Freya and Landon while Cecil frequently exlaims, “This is the furtherest I’ve ever gotten!” while playing RoboCop versus The Terminator for the Sega Genisis.

The next morning, there is a delicious breakfast of waffles awaiting us. I can’t say it enough, the Barnhardts are great people! After lounging about a bit and playing with Viola, we head out for Dallas.  Before leaving town, we hit up Walgreens. It is there I discover this: 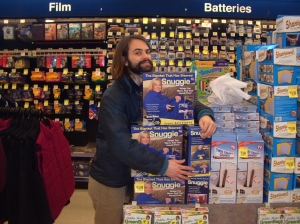 As tempting as it is, I pass on purchasing one.

We head out, eager to arrive in Dallas.  With two great shows to start out tour, nothing could possibly go wrong, right?

Tomorrow begins BP’s short but (hopefully) memorable jaunt down south, then up north east, and then back west to Des Moines, aka “Beati Paoli Winter Tour 2009!” Original, I know.  Here is all the info you’ll need!

Mon.-Feb 2nd –  Hopefully not freezing to death somehwhere between Dallas and Springfield.

This tour is going to be grand. Hitting up some old favorites, as well as some new places. Expect (maybe) daily updates from the road.  And this time, our roadie will be everyone’s favorite youtuber and TNM blogger, Tony!

See you in the funny pages

Today was our CD release show for our first album, A Sense Of Urgency. Two shows, an early all-ages and a late 21 +. Support for the early show came from Adam Robert Haug and The Poison Control Center, while Ross Moffat and Maxilla Blue played with us at the second. For these two shows, we played the entire album. It was kind of a “listen before you buy” thing. All and all, we all think it was a great success. Thanks to everyone who came out, whether it was to see us, one of the other bands or both. We greatly, greatly appreciate it and it got our tour off to a good start.

(Hotel Frank – East Wing, 9/6/08)
The real first day of the tour, though going to Omaha was downright leisurely compared to some of our other first-tour-date drives. Wanted to leave at 2, ended up leaving around 6:30. This is pretty typical. Spent short Omaha drive getting acquianted with Guitar Hero: On Tour for DS (Verdict: pretty fun, but don’t play for more than 15 minutes at a time or you’ll get carpal tunnel) and watching the first three episodes of Xavier: Renegade Angel, an Adult Swim show created by the guys who did Wonder Showzen. Even though I’ve lost touch/become disenchanted with Adult Swim’s penchant for randomness for randomness’ sake, I liked Wonder Showzen a lot and this was in the same vein. So funny, basically. We were supposed to play at another venue in town for this date but that fell through, so Adam was nice enough to let us play at his house, The Hotel Frank. It’s basically two large, old houses connected by a thruway where apparently, under various different names, it’s hosted tons of shows throughout the years. This show was played in the east wing of the house in a living room with Adam and a band called Honeybee. Honeybee was pretty good, they’re suited for this kind of show. I don’t think we are, though. It was ok, but I felt a bit awkward stripped down and I’m not sure if the kids took to us much. Oh well. Adam was really fun, as always. After the show, most of the crowd went on to another house show. I’m lame though, so I went to sleep instead. Oops!

(Box Awesome, 9/7/08)
Woke up, played with cats aroud the house. We went a couple houses down to McFoster’s, an awesome natural foods restaurant. I got the Mexican omlette with pineapple papaya salsa. Excellent. Afterwards, we made the rounds to the local record shops in an attempt to get our album stocked. Succeeding in stocking one; have to call the other ones to make special arrangements. The one that let us put records in, The Antiquarium, had a “Box of Jandek” on the counter though, tons of assorted Jandek albums for $6. Weird. Bought some windshield wipers!!! Picked up Adam from the Hotel Frank and headed out for tonight’s show in Lincoln. After getting stupidly lost, finally found the venue, Box Awesome. Tonight we played with an interesting instrumental act named Mwumbles and Adam again, marking the end of the brief BP/ARH tour. Darren Keen, who basically is The Show Is The Rainbow, was supposed to play with us, but didn’t show. After we played our set to virtually no one, we had to clear the stage for the late show, some reggae nerd named Jah Roots. As we were loading up, Darren came up and apologized. He had thought it was a late show, and was watching an episode of The Shield when he realized. Oops! But he was a nice guy, honest mistake. It was only as we were leaving that Adam mentioned that Darren is the bass player in a band on Saddle Creek called Beep Beep. Mandy and I both think Beep Beep is awesome, so I would have liked to ask him about their new album and stuff. Oh well, maybe next time. This show was also notable as George, Scott’s uncle joined up with us. He’ll be coming along with us on the road until the 20th, or until he gets bored. Which will probably be tomorrow! Oh well, on to Wichita….

this is the last song we needed to upload in order to have EVERY SONG from the new Beati Paoli album, “A Sense Of Urgency”, available online.

While We’re Young (Sing Me Something New):

AND, like all the others, you can add it to your facebook or desktop players through Beati Paoli’s ilike.com profile.

the snocap store doesn’t seem to be working at the moment, so the song hasn’t been uploaded there yet, but DON’T WORRY, we’ll upload it as soon as we can.

and in other, possibly more important, news…

brent houzenga did the art for the flyer. check him out.