Thanks to my pal Becca, I was able to watch the most amazing thing ever. And now I will share it with you!!

This tops anything else you could ever teach a parrot. So just don’t.

HEAVEN IS FOR REAL, GUYS

well, fox news really pinned the nail on the donkey this time. or something. here’s some kid talking about his near death experience, where he found out that everyone in heaven is young (PHEW, no wrinkles guys!). he also got to meet john the baptist, god, and jesus. why wouldn’t they all be together? and caring about this kid at all. this definitely makes sense.

here are some choice quotes:
‘god is a very very big person. he can actually fit the entire world into his hands.’

reporter: ‘wow. so many people want to know what you now know. what about jesus?’
kid: ‘well, jesus, he had a rough but kind face, sea blue eyes, and a smile that lit up the heavens.’

reporter: ‘and what about old people? they are not in heaven, right?’
kid: ‘nope, just young adults.’
then the dad says: ‘the good news, gretchen, is that when you’re up in heaven, it’ll be the young version.’

AMAZING. THIS TRULY IS AMAZING. video after the jump.

END_OF_DOCUMENT_TOKEN_TO_BE_REPLACED

A Fine Collection of Romero Trailers

The Vault of Horror recently posted a collection of George A. Romero Trailers. There are a couple movies missing, such as the ROMANTIC COMEDY, “There’s Always Vanilla” (wait… what?!), and his fourth film, “Season of the Witch” (not to be confused with the recent Cage/Perlman thriller).

I’ve included those in this post, but go check out The Vault for the classics. Classics such as… Knightriders!

And here’s the trailer for There’s Always Vanilla:

And Season of the Witch:

Go to The Vault of Horror for the others.

everybody knows garfield. everybody loves garfield. if the garfield strip was removed from your local newspaper, it would create boycotts and petitions and the possibility of a car or two being upturned and set on fire. however… garfield is NOT FUNNY. as far as i can tell, garfield has NEVER BEEN FUNNY. over the years i’ve pondered what makes comic strips like this, and most of it’s newspaper companions, so dear to so many people. one day, i might share my theories, but not today! this post is less about human behavior, and more about fixing the problem of humor comics that lack the ability to make us feel anything but scorn.

(at least with these old strips the art is so atrocious that you can get some pleasure out of looking at it. but in the end, old jim had to go and ruin that too.)

okay. now that we can all agree upon the complete waste of time that is garfield, let’s look at the projects of a few brave people who are actively working to solve this problem.

1.) garfield minus garfield
“Garfield Minus Garfield is a site dedicated to removing Garfield from the Garfield comic strips in order to reveal the existential angst of a certain young Mr. Jon Arbuckle. It is a journey deep into the mind of an isolated young everyman as he fights a losing battle against loneliness and depression in a quiet American suburb.”

2.) The Eagle_Fire Garfield Randomizer
“…so this guy noticed that Garfield comics make just as much sense if you throw random panels together, and sometimes are actually pretty funny. He got a cease and desist letter. So he made the code available for people who wanted to try it for themselves. Here we go!”

so there you have it. i, for one, am glad there are people out there who have decided to dedicate their lives to fight for real, substantial change. thank you. 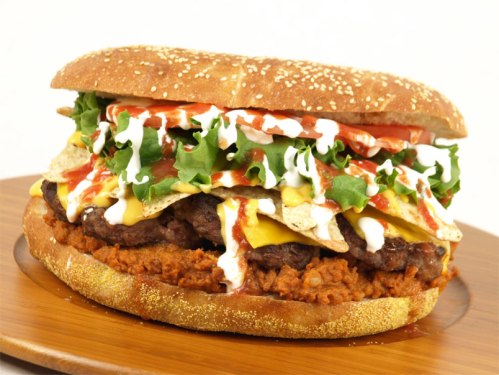 We grab some continental breakfast and split, heading to the nearest Sears Auto Center to get the van fixed. Hopefully we won’t have to pay a lot for a muffler. or radial belt.

It turns out we won’t really have to, but it will take an hour or so to get fixed.  Which is great as it is just enough time to see what sort of things go down at the Muskogee Mall on a Tuesday morning.  We nearly get lucky as a woman approaches us and tells us that we look like the pop-drinking type.  We’ve just met this lady and she already has us figured out. Turns out she’s doing a taste-test for two new Mountain Dew flavors.  We all jump for joy simultaneously.  However, our jumping is short lived as we soon discover that we must live within a forty five mile radius of Muskogee to take part. We briefly consider taking up permanent residence in the area, but ultimately decide against it.

Two hours later and two hundred dollars lighter, we head out for Springfield.  Spirits seem to be a bit lower than normal due to the Mountain Dew tasting not panning out, but we take comfort in the fact that retro arcade, 1984, is located at our next stop. That’ll cheer us up. 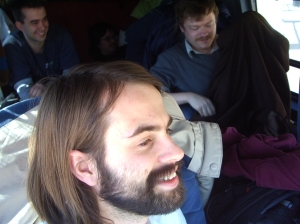 poor deluded fools...if they only knew...

The van has barely come to a complete stop and Tony and Scott have already hit the ground running in the direction of the legendary arcade. The rest of us catch up to find both guys holding one another, softly weeping. Turns out the place is only open Wednesday through Saturday and today is Tuesday.  Dejected, we retreat to some coffee shop to kill several hours.

We play an open-mic at the Outland. An old-man, whose name escapes me, performs stand-up that is pretty amusing, until he veers off into homophobic territory.  But he’s rather old, so no one says anything.

We play then head to our old pal Andrew’s place.  When we awake in the morning, it’s somehow colder inside his house than outside.  Cecil takes  a massively long (time-wise) dump and we then leave for St. Louis. 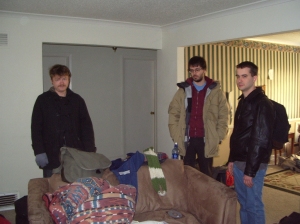 Arriving in St Louis slightly earlier than planned, we find a laundry mat and the weaker members of the band, whom shall remain nameless, do laundry.  Greg and I simply watch.

We play a set at The Way Out club. After finishing, a  gentleman who probably lacks a roof to sleep under, politely demands we play “Smoke on the Water.” I clumsily stumble through the chorus. Unimpressed, the man starts yelling louder. At this point, the bartender spots that he brought in his own beer and promptly tosses him out. I feel bad for not having fulfilled his request.

sorry. i know this is just adding to the absolute randomness and pointlessness, but… C’MON!!! LOOK AT THESE GENTS!!!