What happened to the independent comics icons?

Remember all those awesome, creator-owned, independent, iconic, American/Canadian comic series of the 1980s and 1990s? You had Cerebus, Teenage Mutant Ninja Turtles, American Flagg, Concrete, The Crow, Flaming Carrot, Madman, Hellboy, Sin City, Bone, and more. (I’m certainly not counting the Image founders’ series because those were as corporate and mainstream as anything released by Marvel or DC.)

So, what happened? I don’t really see anything like this today. Sure, there are a lot of creator-owned things published by indie press after 1999 but a lot of it is by mainstream guys moonlighting in the slums or just trying to get hired by Marvel. Walking Dead is certainly iconic at this point but it doesn’t seem as unique or graduated from the mainstream as the series listed above (or at least, as different as they seemed to be when they debuted).

Am I wrong? Am I just missing this stuff? Has the landscape just changed so that my outlook is outdated? Help me.

Frazer Irving (born in the 1970s, Ilford, Essex) is a British comic book artist known for the 2000 AD series Necronauts. Since breaking into the American market he has worked on a number of superhero titles, including a number with Grant Morrison.

I love when artists who seem like they shouldn’t draw superhero comics draw superhero comics: I’d place Frazer Irving in that category. His art seems perfectly suited to atmospheric horror stories, so to see his style applied to Batman and Robin is to see two potent elements combine to make a much more potent whole.

Irving’s first work with Morrison was on Klarion, part of the latter’s Seven Soldiers megaseries. His first Morrison/Batman art appeared in Batman: The Return of Bruce Wayne #2, which saw the titular hero recast as a Puritan detective (see above) during his travels through the timestream.

He recently completed work on Morrison’s final arc of the Batman And Robin title he helped initiate. Irving was given ample space to display his gothic art on characters like Professor Pyg…

…and, of course, The Joker.

This may sound hyperbolic, but I think Irving’s Joker has for me quickly joined the highest echelon of Clown Prince depictions (Brian Bolland’s at #1). He looks so diseased and sinister. Let’s luxuriate in his Joker’s toxic glow:

HEAVEN IS FOR REAL, GUYS

well, fox news really pinned the nail on the donkey this time. or something. here’s some kid talking about his near death experience, where he found out that everyone in heaven is young (PHEW, no wrinkles guys!). he also got to meet john the baptist, god, and jesus. why wouldn’t they all be together? and caring about this kid at all. this definitely makes sense.

here are some choice quotes:
‘god is a very very big person. he can actually fit the entire world into his hands.’

reporter: ‘wow. so many people want to know what you now know. what about jesus?’
kid: ‘well, jesus, he had a rough but kind face, sea blue eyes, and a smile that lit up the heavens.’

reporter: ‘and what about old people? they are not in heaven, right?’
kid: ‘nope, just young adults.’
then the dad says: ‘the good news, gretchen, is that when you’re up in heaven, it’ll be the young version.’

AMAZING. THIS TRULY IS AMAZING. video after the jump.

END_OF_DOCUMENT_TOKEN_TO_BE_REPLACED

got some great looking flicks coming up.

when did jane eyre become a horror movie? i’m not sure, but this ‘gothic thriller’ looks amazing. directed by cary fukunaga (sin nombre), and shot by adriano goldman (sin nombre and city of men). opens march 11, 2011.

no, it’s not that movie with edward norton and jessica biel. it’s this movie, directed by sylvain chomet (triplets of belleville). it follows a performer who is having to compete with the up and coming rockstars of the new generation. it looks magical. drops dec 25, 2010.

a documentary that follows the story of the linotype and its operators, as well as its ephemeral existence. directed by douglas wilson.

Trick-or-treating in Gainesville and other places sucks, it turns out

Dear people that live(d) in or near Des Moines, Iowa.

Guess what?  Here in Gainesville, Florida, when kids go trick or treating, they don’t tell corny jokes.  What the hell?  I guess this lame non-telling of lame jokes is pretty widespread as my New York native girlfriend never heard of that and neither had her New Hampshire native sister-in-law!

The kids and the candy givers barely even interact at all.  No one says, “Oh, I like your costume, what are you dressed up as?” or anything.

Also, there is no set time for trick-or-treating.  Just start when you want, end when you want.  I saw kids still running around at 9:20.   Not like in Des Moines, where it’s officially 6pm-8pm as decreed by the City.

This is so sad.  -kicknz

This is one of the best ideas I’ve seen in a long while. And I’m sorry that this is basically just a cut/paste post, but I figured I’d let the artist speak for himself:

I am pleased to preview ‘Dead Drops’ a new project which I started off as part of my ongoing EYEBEAM residency in NYC the last couple weeks. ‘Dead Drops’ is an anonymous, offline, peer to peer file-sharing network in public space. I am ‘injecting’ USB flash drives into walls, buildings and curbs accessable to anybody in public space. You are invited to go to these places (so far 5 in NYC) to drop or find files on a dead drop. Plug your laptop to a wall, house or pole to share your favorite files and data. Each dead drop contains a readme.txt file explaining the project. ‘Dead Drops’ is still in progress, to be continued here and in more cities. Full documentation, movie, map and ‘How to make your own dead drop’ manual coming soon! Stay tuned.

I recently remarked to my brother that Akira and Lone Wolf and Cub (and similar works by the creators of those works) were the only mangas (I’m going to pluralize it with an “s” because that’s how we fucking indicate pluralization in English) I’d ever read that weren’t retarded. Further review reveals that assertion as impulsive and over-general, as I really enjoyed the 3 volumes of Hiroshi Hirata’s Satsuma Gishiden that Dark Horse bothered to publish, and I’ve died laughing at the 4 volumes of Cromartie High School that I’ve read. Still, with as many comics as I read and how little of it is Japanese, it seemed like I must have been missing some good stuff.

I surfed around, consulted “best-of” lists, and did that sort of nonsense and came up with a list of works that I want to check out. Then I downloaded or checked out the first volumes of these series from my local library and read them. Here are the opening volumes that I thought were great and convinced to read the rest of the series (which I will do in the future).

Uzumaki by Junji Ito, 1998
You won’t need a Japanese-English dictionary to figure out that uzumaki means “spiral”. The things are everywhere in this story and inspire major obsessions and eventually supernatural happenings. The characters are flat as hell but the events are creeeepy.

The Drifting Classroom by Kazuo Umezu, 1972
An entire school is suddenly teleported to a hostile wasteland and everyone. Barely any time passes before kids started gettin’ fatal. 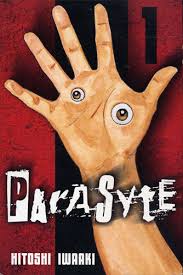 Parasyte by Hitoshi Iwaaki, 1990
I actually read some of this series back in the 1990z when Tokyopop was serializing it in some wacky magazine my brother was buying. Anyway, I think of Parasyte as a horror version of the 1960s Spider-Man comics. A run-of-the-mill teenage boy is randomly gifted with an incredible power. However, this gift is a parasitic alien with a mind of its own that really enjoys eviscerating its alien peers. Biomega by Tsutomu Nihei, 2004
This is really the most cliche of the mangaz that I’m covering in this post, as it’s mostly brainless with stupid fashions and wussy heroes. However, the whole atmosphere is so gripping and several wide-lens type landscape shots are so epic that I was sucked in (also, there is a bear sleeping in a bed). A lame android rides around on his motorcycle avoiding zombies and firing RPGs at nuke missiles. 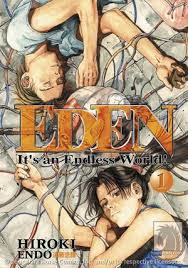 Eden: It’s an Endless World by Hiroki Endo, 1998
The story takes place in your basic, near-future, post-apocalypse but with a multi-generational twist. The character development and long stretches between major events almost give it a “slice of life” feel.

20th Century Boys by Naoki Urasawa, 1998
The story jumps back and forth in time, showing the same group of males as pre-adolescent boys and then as early middle age men. In the past, the boys hang out and have fun while in the present, a cult gets busy and starts a murder mystery. Children of the Sea by Daisuke Igarashi, 2005
Full of beautiful depictions of the ocean and shoreline areas, as well as the animals one might find in those areas. Also, there are some kids that are kinda magic in water or something and a girl gets kicked off of her handball team.

Well, if I included a premiere volume in this post it means I think it was overall excellent and worth your time and, most importantly, I intend to read the remaining volumes in the respective series. There were definitely some first volumes that I didn’t get into but I’m just keepin’ it positive here. Also, there are several others that I haven’t gotten to yet and I’ll give a full report when I have!